Sunday morning we packed up the coach, aired up the tires, and hit the road.  Since there was not a level place to hook up the toad, we decided we would drive up to the Smoky Mountain NP Visitors Center to hookup.  Since all the National Parks had just opened back up a few days before the park was super busy!!  It took us 2 hours to drive about 5 miles from Twin Creek up to the Visitors Center.

Stephanie talked to a few of the Park Rangers the previous day and decided that we would drive over US-441 through the Smokies.  I was quite nervous but Stephanie was ready to go!!  What a gorgeous drive! 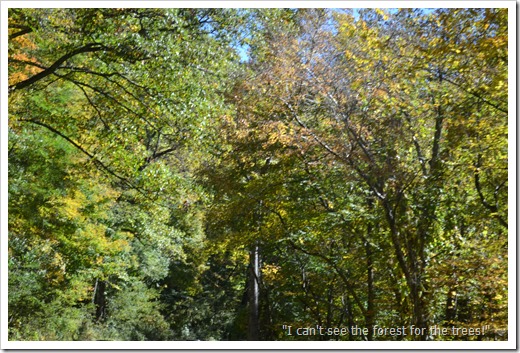 It took us about an hour to transit the park.  We stopped at the Cherokee Visitors Center for lunch in the coach before heading down the road. 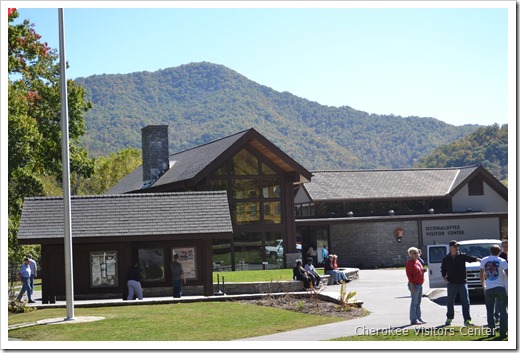 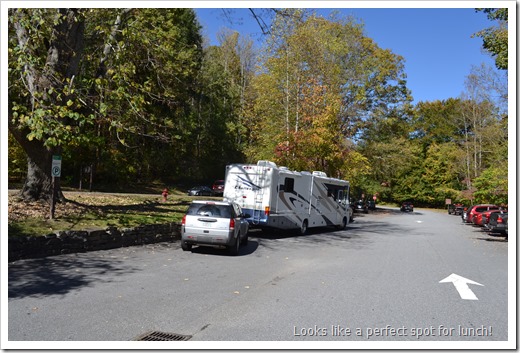 The rest of the day was spent on US-441 through Macon Georgia down to I-75.  We stopped at the Flying J in Cordele Georgia for the night.  By the way, if you need to stop for the night in Georgia, don’t stop in at the Cordele Flying J!  It was so noisy!  There were train tracks right behind the station that came by blasting the horn about every 30 minutes…  Ugg… 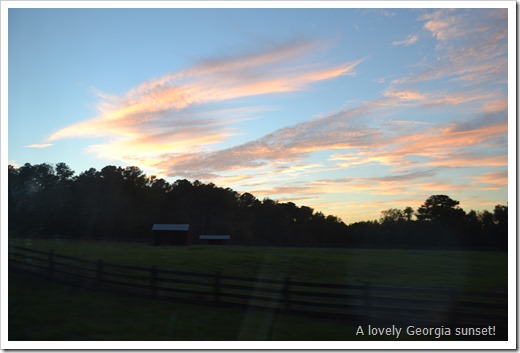 We arrived home about 2:30 on Sunday afternoon.  What an awesome trip!!

I’ll be posting a little more detail about the two campgrounds we stayed at in the future.

We left Clarksville and Fletchers Fork, our home for the past 3 nights on Tuesday morning to head for Gatlinburg.  It was so beautiful this morning with the fall leaves falling in the cool breeze.

We needed to fill up the tank on the coach before heading out of town so we decided to drive separately over the the gas station across the street from Shea and Ashley’s apartment since the price was right!  After the fill up, we pulled into a Home Depot to hook up the Vue and hit the road.

The drive was just perfect.  Lots of fall colors, some nice up and down and not too much traffic, at least until we got into Sevier county, then all bets were off! 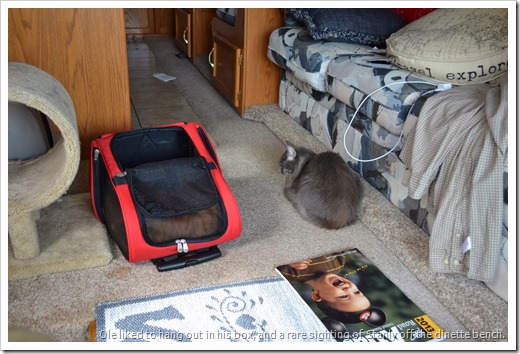 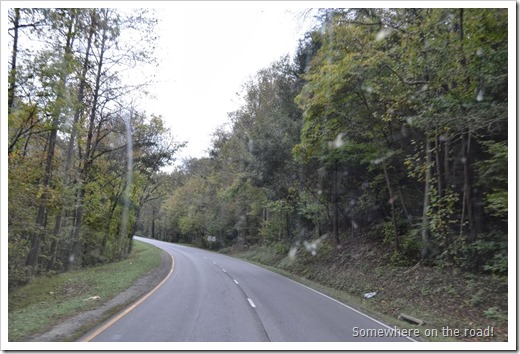 We arrived at our new home for the next 5 nights, Twin Creek RV Resort, just after 5:00.  Our site was up on the side of the hill and Stephanie had to back in up the hill and then into the spot…and as always, we were perfectly parked the first time!

We spent the evening with woodturner friends from St Pete Tony and Karen around a perfect campfire and then it was off to bed!

Stephanie and I spent the day in downtown Gatlinburg.  We checked out the big Craft Fair that Convention Center.  Lots of fun and interesting crafty items for the price of a $5 entry ticket…good stuff!  After the craft show, we walked down to the Pancake Pantry for a bite to eat.  They may have been the best pancakes we have ever had!!!  Stephanie ordered the Apple Cinnamon Pancakes and I opted for the Buttermilk.

After a bit of window shopping, we headed back to the car and drove the auto loop through the Smokies.  Very beautiful drive!

It rained overnight and we ran the heat for the first time in our coach.

On the list today was a trip over to the Bush’s Baked Beans Museum and Café and then to check in at Arromont for my pen turning class.

We did not get to go to the factory but they had a fun movie, “Roll that beautiful bean footage”, information on their process and fun facts.  The café was quite good and if we were in the area again we would go back.  You even get a free sample of beans when you are seated!  Awesome!!

While I was at class Stephanie did some serious shopping at the amazing Christmas Store in Pigeon Forge on Friday.  Saturday Stephanie headed over to North Carolina to visit the Biltmore Estate.

Early in the summer we decided to take a trip to Tennessee so I could take a class at Arrowmont Art School in Gatlinburg.  With mom & dad on the road in their travel trailer and hearing all the fun they were having we really wanted to buy a motorhome.  We just were not sure.  So with TN in mind, we did our research on renting vs. buying and ended up with our 2004 Damon Challenger.

This was it!  The first big test of our new coach.  We left St Petersburg on Friday October 11th after work.  Well, a bit after work.  When I tried to air up the tires at the house that afternoon my little cheap compressor just would not do the job.  We stopped at a gas station to try there, no go…not enough pressure.  So we stopped at Home Depot and picked up a new 150psi Porter Cable compressor and got the tires topped off.

Stephanie drove until she was tired, which was at about 11:00pm at Tifton, GA.  We stopped at a Pilot / Flying J and slept with the rest of the truckers!

We got a pretty early start on Saturday, you have to be a really deep sleeper to sleep in at a truck stop, and headed North into Tennessee.  We made a somewhat quick stop in Lynchburg to visit the Jack Daniel Distillery.  This was a place Stephanie really wanted to check out.  After driving the coach pulling my Vue through the parking lot we discovered not only was the RV parking all “back in” spots but that they were also all filled with cars (a common theme to come).

We headed back NE from the distillery  to a small pull through picnic area about a mile from the distillery.  We figured it would be OK to leave the coach there but we called the local Sheriff’s non-emergency number just to double check.  After leaving a note in the front window stating where we went, when we would be back, and that we had two cats on board we headed over to Jack Daniel.  It was quite a good tour including some very interesting smells (good and bad).

Leaving Jack Daniels we made a bit of a wrong turn and ended up on a very narrow country road.  Luckily it was only a mile long and connected directly with the road we needed.  We made it to Clarksville around 9:00pm after a “bit of traffic” going through Nashville.  Ok, a bit was about 90 minutes to travel 4 miles….  Our campground for the next 3 nights was the FamCamp at Fort Campbell Army Base.  The campground is a few miles outside of the gate and open to the public.  With two campgrounds to choose from, we picked Fletchers Fork due to the larger pull through spots. Getting there so late turned out to be a bit of a problem.  The only spot left open in Fletchers Fork was a handicap spot (there were two others but people decided to park cars and ATVs on the other two…not nice).  We were tired and after a quick drive through the other campground, Eagles Nest, we decided we would use the handicap spot and move in the morning.

The next two days were filled with two trips to Nashville and lots of visiting with my nephew Shea and his new wife Ashley.  On Sunday we visited The Hermitage, Andrew Jackson’s home. 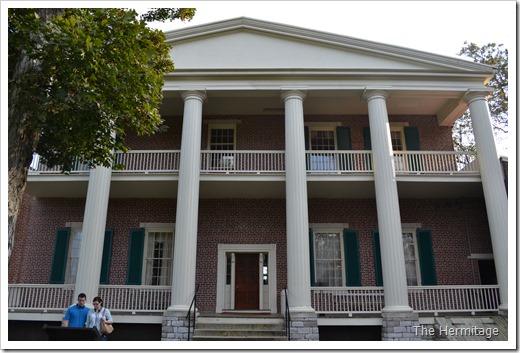 We had a lovely dinner at Shea & Ashley’s home: BBQed Burgers and Hot Dogs!!!

Stephanie and I ran down to Nashville again Monday morning to stop at Woodcraft (I brought my lathe with me but forgot the bushings needed to make some pens).  We also made a stop at Camping World.  The whole trip we had some issues getting air into the outer dully tires on the coach.  The stems are inside the rim and neither of our air chucks would reach.  We bought some extender tubes and Shea helped me attach them to the and route them out to the wheel hub.

When we got back into Clarksville, Shea took us on a tour of Fort Campbell base and PX including showing us where he registered into the base after the last time we saw him in 2011 and where he has been living and working since then.